With an upcoming redevelopment of signiﬁcant scale in the town of Rolleston, New Zealand, the local government was only able to provide community members with 2D paper plans of upcoming changes to the local Playcenter. This made it especially challenging to communicate some of the more complex changes to the parents and Playcenter workers who were affected.

The plan highlighted the area that would be lost due to a road realignment and extension (highlighted in red), as well as the proposed new car park, un-allocated land which the Rolleston Playcenter could expand into (highlighted blue). One of the confusing aspects of the new road was that it didn’t follow the existing road. 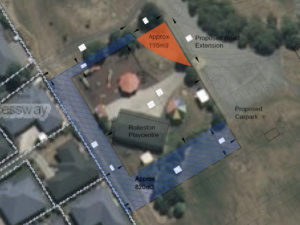 Communicating complex designs and development proposals to community stakeholders and obtaining their understanding and continued engagement is diﬃcult. With a copy of the plans provided by the local council, parents wanted to be able to understand how the changes would impact their community and environment. When the parents met, they brought measuring tape and spray cans along with a paper copy of the plan in hopes of trying to understand the changes.

"SiteVision was a huge success and allowed a decent sized group of community stakeholders to understand a reasonably complex change to their built environment."Ben Broad, Technical Sales Manager

Ben Broad, a Technical Support Engineer at Trimble, and a member of the Rolleston Playcenter community, understood the challenges of communicating the proposed redevelopment to parents and other community stakeholders. So before all stakeholders met to walk through and discuss the changes, Ben contacted the local council and asked for a digital copy of the redevelopment plans and created a simple 3D model using Trimble SketchUp for visualization with Trimble SiteVision.

SiteVision was an easy-to-use tool that allowed community stakeholders to interact and understand the proposed redevelopment and how it would aﬀect their built environment. Augmented reality improved communication and allowed parents to view the proposed redevelopment from multiple angles, helping them understand the impact on the Playcenter’s boundaries and the placement of the new road and parking lot.

Ben’s data preparation and SiteVision replaced the need for a 2D plan and tape measure and allowed the parents to walk through the proposed changes, to scale and in context, and see how the redevelopment would affect both the center and the surrounding environment.

SiteVision was an easy to use tool for the parents. It was a constructive way to:

SiteVision still did not replace the spray can of paint! Paint was used along with SiteVision to mark out the proposed new road design, parking lot, and boundary extension.

The use of SiteVision for community engagement was a success. The Rolleston Playcenter Community was energized by the novel augmented reality technology which helped them obtain an in-depth understanding of the proposed redevelopment and how it would aﬀect their built environment. This energy and understanding have lead to better engagement and acceptance of the proposed changes. SiteVision improved communication by aligning expectations.

In SiteVision’s early days, the Rolleston Playcenter example illustrated how augmented reality makes understanding and communicating complex information accessible and understandable for even those who do not have a technical background.

For the parents who wanted to see how their community was being impacted, SiteVision’s augmented reality capabilities enabled individuals to take an active part in their community’s development.